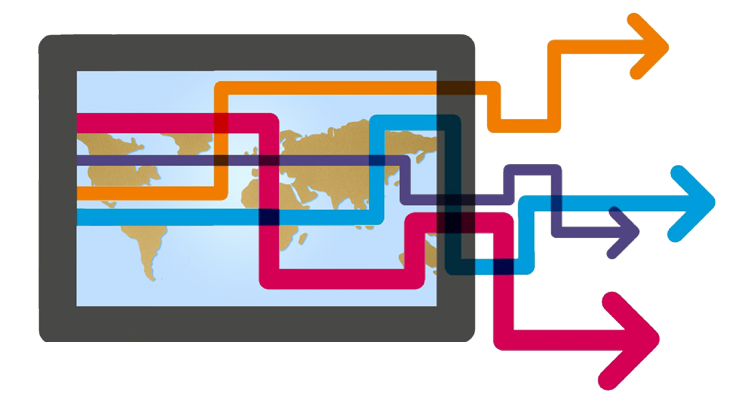 In this article we explain why is your domicile so essential, and the implications with regards to taxation?

There is a general misconception that the UK government is somehow central to the development of Making Tax Digital on the world stage. However, the reality is that similar schemes have been in operation for more than ten years in some countries. Indeed, it would be fair to say that, in some ways, the UK authorities are behind the trend when it comes to tax and digital services.

While results so far have been mixed, on the whole, it is safe to say there have been some substantial tax inflows due to the move to digital reporting. Countries such as Brazil are tackling the “grey economy”, having experienced corruption on an industrial scale for many years. Even though many worldwide online schemes also accommodate personal taxation, there is a heavy focus on VAT. Many governments see this as the low hanging fruit, ripe for picking!

While many continue to fight the flight to online reporting, we have seen numerous governments worldwide moving to make this mandatory. While fraudsters tend to find a way around existing systems, the real-time reporting nature of some schemes is making it more and more difficult. Even though huge funds have been invested in digital projects, they have and continue to reap significant rewards.

Some of the more prominent digital tax schemes around the world include:-

Scheme Name: Digital by Default
The Australian government introduced the “Digital by Default” scheme back in 2013. To support the scheme going forward, the Australian government and regional authorities signed up for digital delivery of their services. This had a positive impact on the overall take-up of the scheme, with the majority of pre-populated tax returns completed and filed online. Each year has also seen more elements of business reporting moved online, allowing the government to micromanage VAT returns.

While there is still work to do, businesses are slowly but surely being converted to the scheme. It was also interesting to learn that the Australian authorities are using Artificial Intelligence (AI) and voice recognition software to support the Digital by Default scheme.

Scheme Name: Nota fiscal eletrônica (NF-e)
When putting together a case for “Making Tax Digital”, many parties have used Brazil as an example of corruption on an industrial scale. This led to the introduction of the Nota fiscal eletrônica (NF-e) scheme, which has been far-reaching and had a considerable impact on businesses. The procedure involves the mandatory use of electronic invoicing when any taxable transaction occurs. All invoices must be submitted to the Brazilian tax authorities in real-time.

Scheme Name: Fapiao
China is often put forward as a country where individuals and businesses follow state guidance to the letter of the law. Unfortunately, this is not always the case which has led to the digitisation of the Fapiao system. This paper system has been in use since the 1980s and is now used as a basis for the Chinese government’s digital revolution. Interestingly, while many countries have introduced digital services to recoup “lost” tax, digitisation of the Fapiao system has helped many Chinese companies reduce their tax burden.

You probably won’t be surprised to learn that the Chinese government is currently looking to put together its own blockchain system. This would create an unbreakable chain which will track and validate business activities and tax obligations.

Scheme Name: X-Road
While often seen as a minnow, Estonia has been a leader in digitisation. The original X-Road plan was developed and launched in 2001, although it has undergone massive changes. The tax system for individuals and companies has been revolutionised with a single shared digital platform, X-Road, central to the scheme.

One single secure login, based on an individual’s digital identity, has revolutionised the tax system. The ability to visualise your tax returns, make edits and take online advice has led to a massive reduction in omissions and errors. The scheme has been so successful that the base technology is now used in Finland, the Faroe Islands, Iceland, Japan and other countries.

There are now more than 52,000 organisations using the system, with more than 1.5 billion transactions carried out each year and over 3000 e-services available. It is believed that the system saves the Estonian people more than 1340 years of work each year. To say that it has paid for itself is an understatement!

Scheme Name: Jednolity Plik Kontrolny (JPK)
On 4 July 2019, the Act on Tax on Goods and Services came into effect in Poland. This saw the introduction of electronic documentation covering VAT returns and the periodic reporting of transactional data. Known as JPK, the system uses the latest in cutting-edge technology. As a result, the Polish authorities can carry out in-depth compliance checks and take immediate action. This has placed the onus back on individuals and companies to ensure that their tax returns are correct and they have fulfilled all of their tax obligations.

Scheme Name: Comprobantes fiscal digital por internet (CFDI)
In a similar fashion to Brazil, Mexico has had its fair share of problems concerning fraud and non-payment of taxes. Therefore, it will come as no surprise to learn that the CFDI scheme was introduced back in 2010. Forcing all parties to complete e-documents it allows the government to produce digital tax receipts. In 2017 the scheme was extended to include the tracking of payment receipts.

While it is difficult to say with any great certainty how much money this scheme has saved, the Mexican government released some interesting statistics. Between 2010 and October 2016, they performed 11,000 electronic audits with 5358 fines handed out, raising more than MXN55 million. We also know that 565 establishments were closed down for non-compliance with the scheme.

Scheme Name: Národní elektronický nástroj (NEN)
Introduced in 2014, the Czech Republic’s digital tax scheme is known as Národní elektronický nástroj (NEN). In reality, this change was forced on the Czech government after recognising a £2.2 billion annual VAT shortfall caused by fraud, error and omissions. In 2014, the authorities introduced digital reporting for VAT, followed by further business taxes in 2015. While optional for individuals, digit reporting is now mandatory for companies.

Interestingly, the update in 2015 saw a controversial change to how cafés, hotels and restaurants are monitored. They are now legally obliged to upgrade their payment systems to interact with the NEN service. This will allow the government to track receipts in real-time and compare and contrast them against VAT payments. There is no hiding!

Scheme name: Suministro Inmediato de Información (SII)
The Spanish authorities introduced SII back in 2017 to combat a multibillion-euro VAT gap. In 2017 the gap was €5.8 billion, falling to €4.9 billion in 2018. The SII system saw companies with a minimum €6 million turnover forced to report their VAT digitally. There is an automatic penalty system, 0.5% of outstanding payments, with minimum fines of €300 and a maximum of €6000 per quarter.

Monitoring and reconciling VAT payments in digital format have been relatively successful. Consequently, in 2018 the scheme was rolled out in Basque county and Novara, parts of Spain independently administered.

Scheme Name: Sistema di Interscambio
Italy is a country on the precipice of a public sector pension disaster, and it also has the largest VAT gap in Europe at €35.4 billion. While online pre-populated tax returns were introduced in 2015, the Italian tax filing system has been online for more than a decade. However, the change in January 2019 is seen by many as a game-changer.

On 1 January 2019, electronic invoicing was made mandatory for all private businesses and included all transactions. Each invoice must be delivered in electronic format with a digital signature to guarantee authenticity and reduce fraudulent activity. Individuals now having to put their names against e-documents has been a wake-up call. Those who fail to submit digital invoices can face penalties of up to 180% of the VAT.

A report by the European Commission back in 2018 cast a very alarming light on the so-called VAT gap by member states. This difference between VAT receipts and expected receipts highlights some vast discrepancies. The top 10 worst offenders in the EU were as follows:-

Considering these are just the top 10 worst offenders within the EU for 2018, we can only imagine the worldwide VAT shortfall. Consequently, while many countries have already introduced a variation of the “Making Tax Digital” scheme, others are very quickly following suit.

The EU Commission publishes an annual report comparing and contrasting VAT total tax liability (VTTL) against VAT receipts. As you can see from the following graph, there has been a fall of €16 billion in lost VAT between 2015 and 2019. As a percentage of VAT total tax liability, the gap has also fallen from 12.8% down to 10.3%. 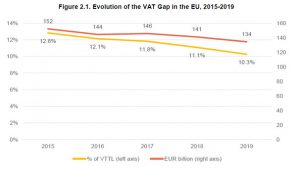 The EU budget for 2019 is broken down into two parts:-

So, even though the combined EU member state VAT income gap fell to just €135 billion in 2019, this is still 43% of the annual EU budget. This puts everything into perspective!

The more information available in digital form, the easier it is to compare and contrast previous returns and flag any discrepancies. However, the use of AI will be groundbreaking for many countries. These systems can be programmed to accumulate information from various sources, compare and contrast and flag any discrepancies. They can also “learn on the job” due to an element of Machine Learning (ML), spotting and reacting to new trends.

Over the last few years, we have seen massive investments into AI by governments and local authorities. In the right circumstances, this investment will be paid back multiple times. These “Digital Workers” are faster, more accurate and non-biased, helping to avoid any complications, although there will still need to be some human interaction regarding borderline issues. In theory and practice, AI systems will be able to spot problems, create reports and even issue correspondence and fines to the relevant parties!

The taxation system as a whole has changed dramatically in recent years. While online personal tax returns have proved useful, VAT digit returns will see governments recoup vast amounts of lost income. For example, while the estimated level of lost VAT in Italy was more than €35 billion in 2018, the UK was still losing an estimated €23.4 billion. These are vast amounts of money, and we can only estimate lost revenue from years gone by, gone forever.