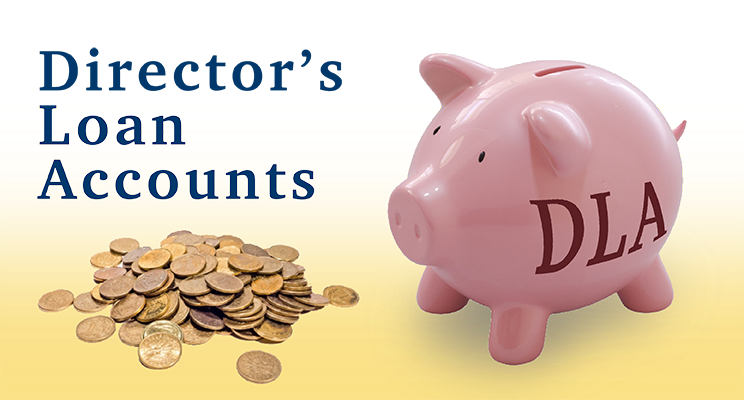 The subject of Director’s Loan Accounts (DLAs) has recently been in the news with concerns regarding the potential misuse of Bounce Back Loans. In theory, DLAs are relatively straightforward, but they can become quite complicated when you dig a little deeper.

The subject of Director’s Loan Accounts (DLAs) has recently been in the news with concerns regarding the potential misuse of Bounce Back Loans. In theory, DLAs are relatively straightforward, but they can become quite complicated when you dig a little deeper.

While most focus seems to be on company loans to directors, it also works the other way, director loans to companies. So, each DLA is a record of the net position between the company and the director. It is essential that the information is up-to-date and the terms of any loans recorded.

As we will cover in a moment, the legal requirements and potential penalties from a director’s perspective and the company are very different.

Why take out a director’s loan?

Many directors use their loan account as a short-term, low-cost finance source. This may help to address:-

There are no restrictions on how a director can spend their loan money, but DLAs are only recommended as a last resort.

On the flip side of the coin, directors can lend money to their company. Again, this can provide a source of immediate short-term, low-cost finance. It may also prove helpful where the company has a chequered credit history and may find it challenging to secure commercial funds.

A company could use borrowed funds for an array of reasons, including:-

We will now focus on loans from a company to a director, as this is where it can become a little complicated!

What type of income is classed as a director’s loan?

There are four main ways in which you can extract funds from a company:-

In theory, all directors’ loans need shareholder approval and should be formally noted in company records. As many directors who use this option tend to be the only directors of the company, “approval” is a foregone conclusion. However, it is important to appreciate the regulations and record any loans to directors.

One element of the regulations often overlooked relates to “participators” of a close company. In many scenarios, they will be treated as if they were a director.

Any DLA with a deficit should be cleared within nine months and one day of the company’s year-end. There are several ways in which you can repay a DLA deficit:-

To pay a dividend, a company must have distributable reserves, i.e. retained profits not yet paid out to shareholders. In addition, interim and final dividends must be paid no later than nine months after the company’s year-end. This fits in perfectly with those directors looking to offset DLA deficits by paying a dividend. However, this is simply a bookkeeping process whereby the proposed dividend is transferred to the director’s loan account, thereby negating the deficit.

If there are no distributable reserves, then a dividend cannot be paid. Also, if a director believes that the company may be insolvent, they cannot declare dividend payments. If the company was liquidated within two years of a dividend payment, this could be reclaimed if deemed a “preference” by the liquidator.

It is perfectly legitimate to offset a director’s loan account deficit against salary payments. Again, this would be a bookkeeping process; the salary would not be paid to the director but instead transferred as a credit to the director’s loan account. Under the PAYE system, the company would need to pay income tax and national insurance contributions from any salary payment. As the DLA deficit must be repaid within nine months and one day of the company’s year-end, the salary payment offset option can include salary paid in the company’s current financial year.

If a salary was paid to offset a director’s loan deficit, despite the company being in financial difficulties, there might be further repercussions. For example, if the company fell into demise and a liquidator was appointed, they may review salary and bonus payments. If these were “not in the company’s best interests at the time”, they could be challenged and reclaimed.

Where a director has spent their own money on company business, this can be reclaimed as expenses. This may take in various forms such as travel expenses, home working expenses and client entertainment, to name but a few. In theory, it is possible to try and claim costs incurred before the year in which the DLA went overdrawn. However, this could mean submitting an array of amended accounts, potentially leaving the company open to a tax enquiry.

If all else fails, a director with an overdrawn DLA can make a payment from personal funds to offset the deficit. Unfortunately, the fact that the director felt the need to go overdrawn on their loan account suggests that funds might be difficult to find. On occasion, directors will use their loan account if they are awaiting receipt of personal funds further down the line.

While there may be a temptation to repay a DLA deficit one day before the company’s year-end, and withdraw funds again one day into the new company financial year, this is not allowed. Referred to as “bed-and-breakfasting”, new laws were introduced whereby loans could not be re-borrowed within 30 days of repayment.

Repercussions if DLA deficit not repaid

If a DLA deficit is not addressed within nine months and one day after the company year-end, there are potential repercussions for directors in a personal capacity and the company:-

If a DLA deficit is not addressed by the deadline, HMRC will apply an S455 tax charge, often referred to as a “higher rate of corporation tax”. However, it is a specific tax charge against an outstanding DLA. The rate currently stands at 32.5% of the outstanding balance on a DLA with an additional interest charge of 2.25% (introduced in 2021/22 tax year) added to the S455 tax charge each year.

In theory, this is a temporary charge as once the DLA has been repaid the company can apply for repayment of the S455 tax charge. This will form part of the company’s tax return in the year the DLA is repaid, although interest on the S455 tax charge cannot be reclaimed. The claim must be submitted using a form L2P (repayment is not automatic) with funds received from HMRC nine months and one day after the end of the company accounting period.

The debit on a director’s loan account may be treated as a benefit in kind if the following conditions are met:-

If the above conditions were met, the director would need to record the loan on a P11D form and as part of their self-assessment tax return. In reality, the outstanding deficit would be added to the director’s income with tax charged accordingly. The deficit is treated as part of the director’s PAYE salary, with the company also incurring a national insurance charge.

It is important to note that the company is responsible for collecting PAYE and NI and forwarding these funds to HMRC. However, in the event that the company became insolvent, HMRC could pursue directors personally for unpaid tax due from the company. This may occur in the following scenarios:-

In summary, if a failure to cover HMRC payments was deliberate or the result of negligence/fraud then directors can be held personally responsible for outstanding taxes.

Are there any exemptions from the S455 tax charge?

There is no doubt that HMRC is very keen to stop the potential abuse of DLAs, but there are several scenarios that are exempt from the S455 tax charge:-

If you have a situation where a husband-and-wife partnership are directors of the same company, there is the potential to offset DLA accounts. If, for example, one party had a £5000 credit and the other had a £5000 debit on their DLA, these could be considered under an offset arrangement. This must be agreed in writing and the relevant documentation retained by the company.

If the business in question includes money lending, then an S455 charge may not apply. The loan must be made in the “ordinary course of business” in this scenario.

Supply of goods and services

If the DLA deficit is related to the company’s supply of goods and services in the ordinary course of business, this would be exempt from the S455 charge. However, this exemption could be revoked if the credit period exceeded six months or was longer than that given to other customers. In simple terms, the director must receive no preferential treatment on the credit terms.

No material interest in the company

Can a DLA be written off?

In theory, company directors can agree to write off a DLA, although this must be recorded in writing. Under the Income Tax (Trading and Other Income) Act 2005, this write-off would be treated as a dividend. In this instance, no distributable reserves are required, and the dividend does not need to be paid to other shareholders. However, it is likely that HMRC would dispute a DLA write-off, arguing that it was part of payments from an office/employment. This would create a National Insurance Contribution and income tax liability for the director and a National Insurance Contribution liability for the company.

If we consider the following scenario; a higher rate taxpayer, a director of the company, had received £25,000 from their DLA, which was subsequently written-off. HMRC would class the £25,000 as a net payment after PAYE and National Insurance Contributions. The calculation would be as follows:-

In this instance the company would also be liable for employer’s Class I National Insurance Contributions at 13.8% or £5948.

The director benefitting from the write-off would still need to include this in their self-assessment tax return. Interestingly, while a write-off would typically attract an element of corporation tax relief for the company, this is not the case in this scenario.

What happens if the company is liquidated?

If a company is liquidated with outstanding DLA deficits, these are classed as an asset. Consequently, the liquidator is obliged to pursue directors to repay debts in full. These funds will be accumulated with other assets to repay the company’s creditors.

While the idea behind DLAs is relatively straightforward, things can get increasingly complicated when you begin to dig a little deeper. A DLA should be a last resort for any director, as failing to repay on time can have severe repercussions for the company and the individual. Consequently, it would help if you took advice before utilising DLAs.